Natal dispersal in weavers on the Cape Peninsula - Phase 2

Phase 1 consisted of ringing chicks; for the introduction and results of Phase 1, see here

In this phase normal mist-netting is conducted to recapture as many weavers (and other species) as possible, particularly birds that had been ringed as chicks. Mist-netting will be conducted at different sites from Rietvlei south to Kommetjie, and east as far as the N7.
To become involved in this project, see email below and calendar of ringing events in cape Town. 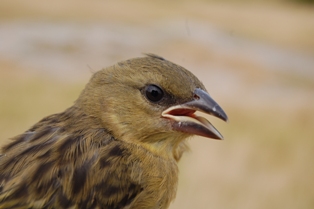 In the table below the totals are shown for Cape Weaver (CW), Southern Masked Weaver (SMW) and Southern Red Bishop (RB).
Summary of distance statistics
Summary of totals recaptured per month

News items relating to the second phase of this project

The headers below refer to Weaver News items featuring the second phase of this project. Click on a header to see the News item, which includes the full news item. (The number in brackets is the date that the news item appeared on Weaver Watch).