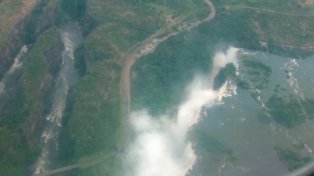 The Zambian Ornithological Society invited me to run a bird ringing course on Bovu Island, on the Zambezi River, about 60 km upstream of Victoria Falls. Selected photos are shown from each ringing session, and species totals caught are shown in the Table at the end.

While waiting for my transfer to Bovu Island, I had time to visit the Livingstone Museum and look at some weaver specimens. The most unusual specimen was a leucistic Yellow Bishop.

Three days were spent ringing in the village on the mainland next to Bovu Island. The village sorghum fields attracted flocks of quelea and bishops. The Red-billed Quelea were mostly juveniles, although a few adult males were also caught. Several of the Southern Red Bishops were breeding females. A male and female White-winged Widow were caught, also in the sorghum fields. A Village Weaver male and female of the northern race were ringed. Thickets next to the village and Zambezi River produced birds like Heuglin's Robin and Red-backed Shrike.

We left very early on Monday to ring at a large reed bed near Katombora on the Zambezi about 20 km north of Bovu. The nets were between reeds and thickets. The most caught species was Green-spotted Dove, which came to drink at the water next to the nets. This was followed by 10 Blue Waxbills and seven Little Bee-eaters. European Marsh Warbler and European Reed Warblers were carefully studied and identified in the hand.

Bovu Island treated us to a sunset cruise in mokoros (dug-out canoes).

We were treated to wonderful meals by the Bovu staff, so that we could maximise our time ringing. Evenings we could relax in the bar, watching the sunset on the Zambezi. Cameras, laptops and cell phones were recharged using solar power. To read more see the Bovu Island webpage. 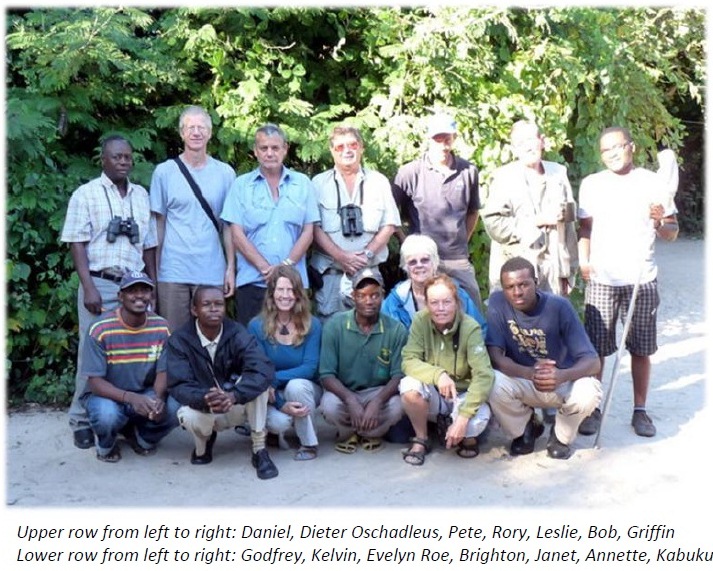 Congratulations to Rory who qualified as a ringer, since he had sufficient previous experience.

A total of 327 birds of 45 different species were ringed during the week of ringing. Four species I had not handled before were Tropical Boubou, Coppery Sunbird, White-fronted Bee-eater, Steelblue Widowfinch (Village Indigobird), and Yellow-bellied Sunbird. Some birds were migrants, probably en route north: Pygmy Kingfisher, Red-backed Shrike, European Marsh Warbler, European Reed Warbler (care was taken by the attendees to identify the latter 2 species!). Two birds were recaptured (retraps not included in totals below):
A Terrestrial Brownbul (1B1741 Livigstone Museum) was recaptured on Bovu Island;
A Black-collared Barbet (CC15728) ringed in the Village was recaptured 4 days later on Bovu Island.

I spent one night at Maramba to bird on the property and to explore Victoria Falls on the Zambian side.

Many thanks to Brett Saunders and Evelyn Roe for hosting the course (although Brett could not be present)
Thanks to the Bovu staff for their amazing meals and help - Alice, Sister Di, Godfree Kalemba (a guide on Bovu Island), Brighton Nyambe (a trainee guide)
Thanks to ZOS for inviting me and sposoring my flight - ZOS also sposored some attendees.
Thanks to Clare Mateke, for access to Livingstone Museum specimens