"The Pan-African Ornithological Congress (PAOC) meets every 4 years and aims to further the study of African birds, to promote the preservation of African birds as an integral part of the African heritage, to foster the appreciation of birds and discussion of African birds in relation to man, and to disseminate information on African birds through appropriate international meetings (Congresses) and publications (Proceedings of the Congresses)."

From the PAOC web.

Arriving early on Sunday at Hotel Ngor Diarama, venue for the PAOC, gave time for some birding around the hotel and north to a lagoon. 4 weaver species were found - Some Red-billed Quelea and Village Weavers were foraging in some grass near the beach at the hotel. On the walk a Yellow-backed Weaver was seen near some old nests, which later turned out to be a breeding colony, and opposite a great sighting of a Red-necked Falcon. A male Little Weaver was seen briefly near the hotel.

A colony of Village Weavers were breeding near the hotel swimming pool. Several nests had chicks that were being fed by females, and rarely males.

A BirdMap and other workshops were held. In the evening a large fruit bat flitted about during the outdoor welcoming ceremony.

A weaver symposium was held after the first plenary.

There were several options for the Mid-congress tour, and I had chosen the one to Mbour and Joal. The Institute for Research and Development at Mbour is a research station with a patch of forest. Many bird species were seen on the 3 hour walk. There is also a museum with 3000 bird specimens.

We then proceeded to drive south, stopping at a wetland. A dam wall was constructed less than a year ago, and already there was a massive heronry of mainly White-breasted and Reed Cormorants, and Cattle Egret. A large colony of Village Weavers was active at the edge of the Reed Cormorant nests. We stopped for lunch in Joal, where we saw some seabirds and shorebirds. On the return journey I recorded as many weaver colonies as I could - many were missed, but a good representative sample was obtained - most were Village Weavers, some were White-billed Buffalo-Weavers, and a mixed species colony was photographed. The trip was long but very well organised.

Bird Ringing symposium and Rest of the PAOC

On Friday Colin Jackson presented the keynote in the Bird Ringing symposium that was co-hosted by Colin and I. Colin presented an overview of ringing effort in different regions of Africa. This was followed by an entertaining talk by Alan Lee on biometrics of ringed birds. At the closing ceremony Colin Beale, chair of the scientific programme, provided some statistics :

After the congress I had organised to spend a few days at Mbour IRD to do some ringing and train 4 forestry students. I travelled with Colin Beale and Nick Mundy who were birding for the day. We stopped at a few places along the way, finding a very productive piece of woodland (opposite the Reserve de Bandia)that had lots of birds, including many Vitelline Weavers and nests.

Here are some of the birds ringed at Mbour IRD.

Over 200 photographic records were submitted to the ADU Virtual Museum, to provide distribution records. Click on the above bird or PHOtos of Weaver Nests (PHOWN) photos above to see the Virtual Museum record.

Thanks to all the PAOC organisers for a great cnference! Thanks to the IRD Director, Mr Laurent Vidal, for permission to ring at Mbour IRD. Thanks to Daouda Sylla, ornithologist at Mbour IRD, for his help with the ringing. Thanks to the UCT Research for funding. 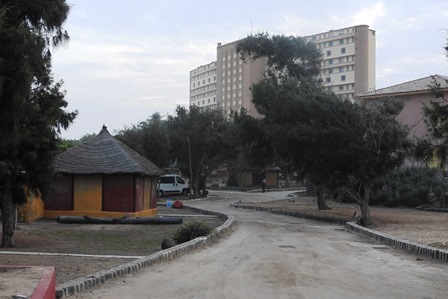 Calao Hotel in front, Ngor Diarama at the back where the congress was held