Robert Thomson, University of Turku, Finland, invited me to visit for a few days. I was able to assist with, and observe, several weaver research projects at Tswalu. Some of the weaver colonies have been uploaded to PHOWN (Photos of Weaver Nests), and links are provided below to the colony records.

Robert is investigating the interactions between Sociable Weavers and the world's smallest bird of prey, the Pygmy Falcon.

Rowan Martin and Susie Cunningham, Percy FitzPatrick Institute of African Ornithology, among other studies, are looking at weight changes of Sociable Weavers related to temperature. A group of helpers was up before dawn on two mornings (of my stay) to catch, ring and measure weavers at different colonies.

Sociable Weavers do not need to drink water if it is not available, but they do drink when water is nearby. Adults at colony 25 regularly flew the 500 m or so to a reservoir to drink.

Adult Sociable Weavers return to their colony quickly after disturbance. They feed on seeds and insects. The photos below were taken at at colony 76.

Sociable Weaver nests are important ecologically in providing shelter and shade for a large diversity of birds and other fauna. Records noted at Tswalu include:

Andy Young at the University of Exeter, UK, has been running a research project on cooperative breeding in White-browed Sparrow Weavers since 2005. This nest contained a chick and an addled egg (see VM 1547).

At Tswalu a few Southern Masked Weavers were seen in adult male breeding plumage but no active nests were seen (eg, see VM 1538). One male was building a new, green nest although the other nests in the colony were old (see VM 1540). A Diederick Cuckoo was heard daily in picnic valley, probably a male advertising his territory in preparation for the masked weaver breeding season to start.

Scaly-feathered Finches are usually relatively common at Tswalu, but were only noted a few times during my stay. Two nesting trees were found, with non-breeding nests (see VM 1542 and VM 1543).

To see all weaver colonies In PHOWN, from Tswalu, see here.

Thanks to the Tswalu Kalahari Game Reserve for sponsoring my trip.
Thanks to Robert for inviting and hosting me at Tswalu.
Thanks to all the researchers for their insights. 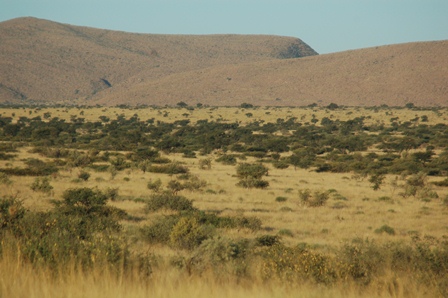 Some other projects at Tswalu: