Ploceus velatus Vieillot, 1819, Nouv. Dict. d'Hist. Nat., vol. xxxiv, p.132
The Southern Masked Weaver was first described in 1819 by Vieillot, based on specimens he thought came from Namaqualand. The concensus is that these were collected by Levaillant, who travelled to the Eastern Cape in 1781-83 and to Namaqualand in 1783-84. The specimens he collected were of the large race (not found in Namaqualand) and thus the type locality was restricted to Graaff-Reinet, E Cape, by Brooke (1985, Ostrich 56:214-215). The first illustration of a Southern Masked Weaver was painted long after the species was first described; Smith illustrated it as 'Ploceus mariquensis'. The first male in breeding plumage was illustrated by Reichenbach (1863).

Identification and sexing:The male in breeding plumage is identified by its red eye and narrow black forehead; the female and male in non-breeding plumage are identified by the grey back with brown streaks. The female usually has a brown eye but sopmetimes has a reddish eye while breeding, as shown in the photo below.

This species is common throughout southern Africa. One colony that has existed for many years is in a remote, rural area. Several nests are situated on a barbed wire fence near Kingsley, between Dundee and Vryheid in KwaZulu-Natal. The colony was first found in 1986 (Oschadleus HD 1987, Masked Weavers building nests on fences. Albatross 290:11) and has been present since then. 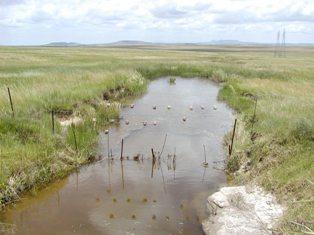 Southern Masked Weaver colony on fence near Kinsley in 2002 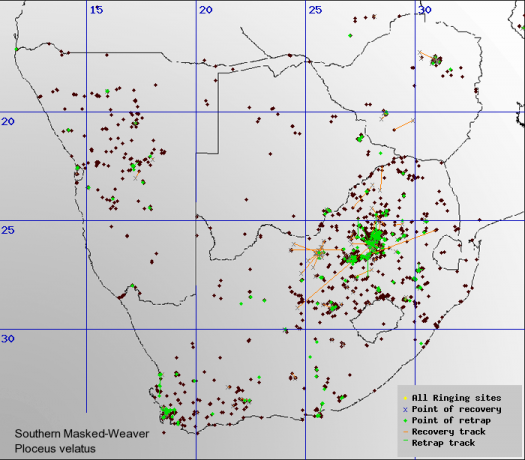 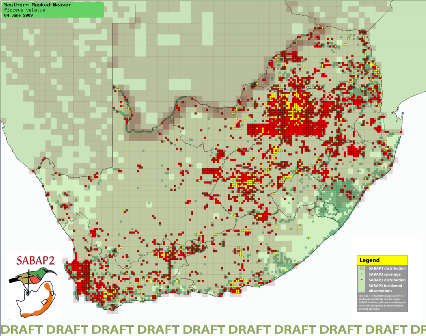