Weaver Watch on the Cape Peninsula

In this project I would like to find as many weaver colonies as possible on the Cape Peninsula. This will enable a study of nest sites used, and distances between colonies. See also: Is the Cape Weaver population on Robben Island isolated?

The four male weaver species on the peninsula can easily be distinguished if you have good, close up views: Cape Weaver, Southern Masked Weaver, Southern Red Bishop, and Yellow Bishop. Adult males in breeding plumage

Map of Cape Weaver colonies on the Cape Peninsula. Closed red circles show currently known colonies, open red circles show colonies that no longer exist. Yellow stars indicate current Southern Masked-Weaver colonies. The primary area of interest is the peninsula (West of the M7, South of Rietvlei), although all reports are of interest. Over 200 colonies (1400 nests) of Cape and Masked Weaver were found. 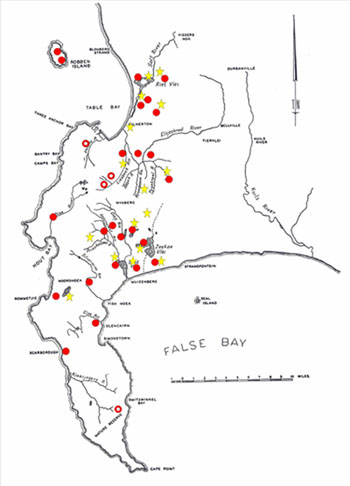