The Red-billed Quelea (hereafter quelea) has not occurred in the Western Cape historically, but in recent years has started expanding its range into this province. There is a single record of a flock of quelea at Zeekoievlei in 1946. The next record is from the Karoo NP in 1986. These and successive records were published in SAJS 2006, with records up to the end of 2005.

In April and May 2007 there was an influx of quelea on the Cape Peninsula. Sightings reported on Capebirdnet and to me are listed below. Please check for errors and additions. Also keep sending in sightings as it is important to see if the quelea disappear or stay, and to what extent they stay. A remarkable observation is that most sites are reported from very close to the coast-line, and even from Robben Island. This indicates that the quelea moved from the interior and travelled as far as they could before being stopped by the ocean. The most likely reason for this influx is that a good breeding season was followed by drought.

Figure: shows number of quelea sightings reported during the influx in the Western Cape, April-May 2007.

Map: shows location of quelea sightings reported during the influx in the Western Cape, April-May 2007 (ignore the legend). 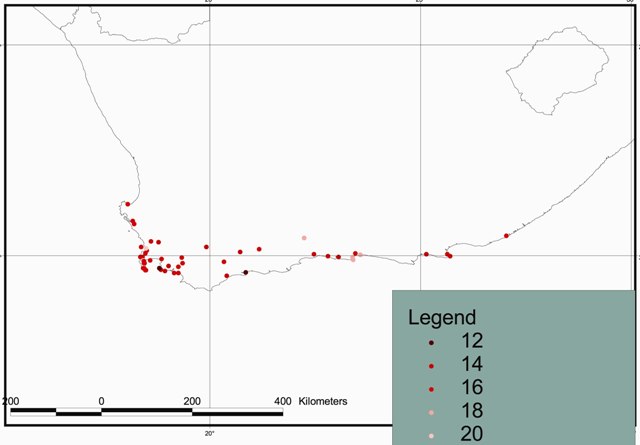 Table: date is the reporting date unless an actual sighting date is reported. Records are listed chronologically. Note: newly reported records are shown in a second table below, even though some of the records fit in between records in the first table.

Newly reported records, up to 30 May 2007
A few records from the N Cape and E Cape have been included. Negative records and records from before 2007 are not shown on the web, but have been archived.
New records, after the influx