There is enough information on this webpage to start a project about weaverbirds. At the bottom there is a reading list so that books can be found in your local library and links to other useful webpages. In the paragraphs below there are sometimes links to more information on these webpages if you would like to know more about that question or subject.

What is a weaverbird?

A weaverbird is a small bird belonging to the family Ploceidae. They are mainly tropical, Old World species noted for their nest building abilities. All species build domed nests, sometimes with long entrance tunnels. True weavers build durable nests with elaborate weaving and knotting grass and reed blades. Weavers are seed eaters with conical bills, although some species have more slender bills for eating insects. Plumages are often yellow, red and black although females are often dull brown colours. The Sociable Weaver builds the largest communal bird nest. The Red-billed Quelea is the most numerous land-bird.

Some examples of weavers: 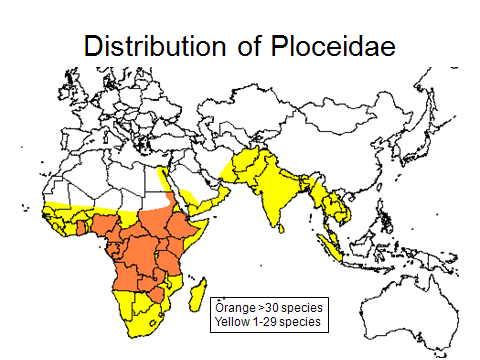 Some weavers have been introduced to other countries, e.g. Australia, Spain and the West Indies off the North American coast.

In which habitats are weaverbirds found?

The main habitats where weavers are found are semi-arid areas, savanna, grasslands and forests. Many typical weavers are found in savannas and some of these have adapted to living in gardens and urban areas, e.g. the Southern Masked Weaver. Some weavers are adapted to living in arid and semi-arid areas, particularly the Sociable Weaver. This species builds huge communal nests which provide shade during hot days and warmth during cold nights. Some weavers are found in forests, e.g. the Dark-backed Weaver and Malimbes in West Africa. Often forest living weavers build nests with long entrance tubes which could prevent smaller snakes from getting inside the nests - see under section on nests.

The habitat on weavers relates to their diet. Weavers in forests and woodlands feed on insects and spiders to a great extent, but may still eat seeds. Savanna and grassland weavers feed largely on seeds, especially grass seeds which are available in this habitat.

What colours are weavers?

The main colours of weavers are black, yellow, red and brown. Females of many species are brownish, but females of forest-living weavers are often similar to bright males.

Count how many weaver species on this page match with the main colours black, yellow, red and brown.

What nests do weaverbirds build?

Weaver nests are usually built of sticks, grass or blades of reeds or grass. Weavers use their bills to build nests. They sometimes use their feet to hold part of a grass blade while using the bill to thread the other end through the nest.

If you would know of weavers breeding near you and you would like to count the weaver nests, you can take part in a project. See more details under PHOtos of Weaver Nests (PHOWN)

How old do weaverbirds become?

Many weavers can reach 10 to 15 years old. The oldest weaver in the wild was a Village Weaver that was at least 14 years old. In captivity weavers can become even older, up to 24 years old in the case of a Village Weaver. In the wild the only way to find out how old birds become is by ringing birds and waiting for some of them to be recaptured or found dead. Some of the records of weaver ages are low because there has not been enough ringing for those species yet. To see longevity records for southern African weavers, look here.

Would you like a weaver nest to study?
If you have weaver nests near you, you may take a nest under the following conditions:
1. the nest is on the ground because it was broken off by the weavers or by weather
2. the weavers are not breeding, i.e. in winter, but see also next point
3. the nest is a non-breeding nest, i.e. no lining in the chamber. Breeding nests may be used by other birds or animals to roost or breed in, and therefore should not be taken
4. nests may not be taken if you are in a nature reserve (even if it is on the ground)
5. you need permission from the land-owner
You can order a weaver nest for R50 inclusive (additional postage outside South Africa) by emailing Dieter.Oschadleus [at] uct.ac.za; where the nest you receive complies with the above criteria

Has this web been helpful? Email Dieter.Oschadleus [at] uct.ac.za with your comments