A team of 5 ringers went on a ringing trip to the bushveld; for me to target some specific weavers and for the others to target bushveld birds in general. Mike Ford, Peter Nupen and Dieter Oschadleus travelled from Cape Town and camped at Suikerbos near Potchefstroom. We ringed at Prozesky with Rita Marais, Lucia, Neels and two trainees. Then we travelled to Vaalkop Dam where Alan Brooks and Klaus Kreft joined us for the rest of the trip. Only a few birds were ringed at Vergenoeg as we decided to pack up early. Planning this trip was doen by looking at the SAFRING database (where birds had been ringed previously) and the book The Chamberlain guide to birding Gauteng.

Southern limits along the N14 for some weavers 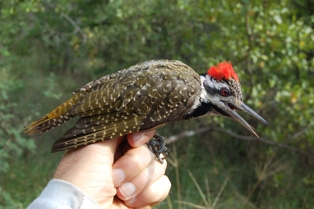 Bearded Woodpecker at Vergenoeg Mine
Just about the last bird ringed on the trip!