The Trails Club of South Africa invited me to hike the Swartberg with them from 28 May to 1 June 2002. Below are some pictures of the hike, followed by my (short) bird list. Read more about our hike, report written by Margie Crawley

The most frequently recorded species was Orangebreasted Sunbird. Cape Siskins were seen several times in flocks of 20-30 birds; they were often seen foraging in the worst weather, including snow and rain. 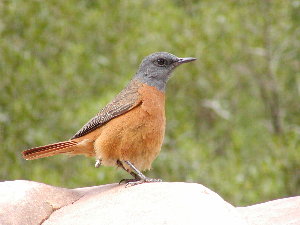