Narrative of a name: red-headed or black-eared?

Scientific names are considered to be standard references to be able to identify animals and plants. Linnaeus is credited with establishing the binomial classification system for providing a systematic way of uniquely identifying organisms. The International Commission of Zoological Nomenclature (ICZN) set up the International Code of Zoological Nomenclature (ICZN Code) which governs the rules for naming taxa. Many birds were named where there has been no confusion and no changes have been required. Sometimes studies of the ornithological literature, or new examples of the correct application of the ICZN Code, require changes to the scientific names of birds. 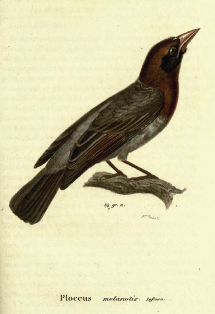 The story of the Red-headed Weaver begins with Frederic de Lafresnaye (1783-1861), a French ornithologist and collector who amassed a large collection of bird specimens that he bought from different travellers. One of the new birds to science that he purchased consisted of two specimens of the Red-headed Weaver originating from Senegal. These specimens are extant and are now housed in the Museum of Comparative Zoology, Harvard University, Cambridge, USA. Lafresnaye named the new bird as Ploceus melanotis in 1839 (Lafresnaye 1839a pp. 20-21). The genus Ploceus had been created by Cuvier in 1817 and Lafresnaye realised the bird he had was a weaver. Male Red-headed Weavers from West and East Africa have a red head with a black face and the latter must have prompted Lafresnaye to give the specific name melanotis, meaning black-eared in Greek. Lafresnaye illustrated this bird in a different publication (Lafresnaye 1839b); although not brightly illustrated, the bird is clearly a Red-headed Weaver of the northern race.

Since this was the first time that the Red-headed Weaver was described scientifically, Lafresnaye's name should be used. Except that fate would determine otherwise.

William John Swainson (1789-1855) was an English ornithologist, malacologist, entomologist and artist. He is remembered in several bird names, including Swainson's Spurfowl Pternistis swainsonii. Swainson described a large number of new species of birds which arrived at the British Museum, but the Red-headed Weaver was not one of them. One of the birds he described, however, was a yellow, black-masked weaver which he gave the name Ploceus melanotis (Swainson 1838). This description was published in an appendix entitled "Two centuries and a quarter" at the end of a book called "Animals in Menageries. Lardner's Cabinet Cyclopedia". In this appendix Swainson described many birds that he considered to be new to science. He wrote of Ploceus melanotis: "Small. Above, olive green; beneath, yellow: front, ears, chin, and halfway down the middle of the throat enveloped in a black hood. Bill slender: tail even." This was followed by a more detailed description and by black-and-white figures of the head and outer primaries, based on the type specimen in the Paris Museum. Later authors have identified this bird as the Little Weaver Ploceus luteolus, which was first described by Lichtenstein (1823) - Swainson's name became redundant. The reason for this is that one of the most important rules of the ICZN Code is the Principle of Priority, whereby the first name to be used for a specific plant or animal should supersede any other name given to it.

By the Principle of Priority, the Red-headed Weaver's name should be the first one used, i.e. Ploceus melanotis Lafresnaye. However, when two identical names have been used for different species, another principle applies. The Principle of Homonymy states that the latter-used name (or junior homonym), i.e. Ploceus melanotis Lafresnaye, is permanently invalid since Ploceus melanotis Swainson (the primary homonym) was established first (for the Little Weaver). These principles should prevent confusion if later taxonomic changes occur, and hopefully at this stage the reader is not at all confused! If Lafresnaye had done his homework and realized that, firstly, Swainson had already used the name Ploceus melanotis and secondly, that in the distant future a commission would be set up to prevent duplicate names from being used, then he could have chosen another name and been credited as the author of the Red-headed Weaver. 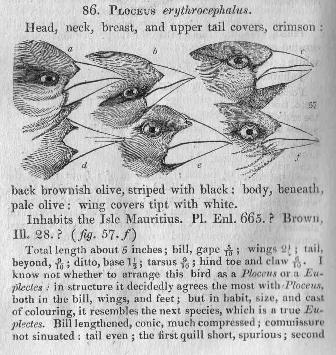 So if Ploceus melanotis Lafresnaye is invalid, then according to the Principle of Priority the next oldest available name for a particular species should be used. The next name to be used for the Red-headed Weaver is Ploceus erythrocephalus Rüppell 1845. Major WC Harris collected a specimen of the Red-headed Weaver from the Highlands of Ethiopia and sent it to Rüppell. Eduard Rüppell was a German naturalist and explorer, being the first naturalist to traverse Ethiopia. Rüppell's Parrot Poicephalus rueppellii and many other birds and animals are named after him. Rüppell named this Red-headed Weaver as Ploceus erythrocephalus in his book "Systematischer Ubersicht der Vogel Nord-Ost Afrikas." The specimen is now housed in the British Museum. Swainson, however, had described another weaver in the publication "Two centuries and a quarter", that is also relevant to this story. He called it Ploceus erythrocephalus, and wrote as follows: "Head, neck, breast, and upper tail coverts, crimson: back brownish olive, striped with black: body, beneath, pale olive: wing coverts tipt with white. Inhabits the Isle Mauritius." A figure of the head and more details were provided. This name is a synonym for the previously described Mauritius Fody Foudia rubra. So once again, by the same arguments used above, Ruppell's name is also invalid (junior homonym of Ploceus erythrocephalus Swainson). So again, by modern rules of nomenclature, this name cannot be used for the Red-headed Weaver.

Incidentally, the locality that Swainson used for the Mauritius Fody is correct. Often specimens arriving in Europe by ship were mislabeled as to their origin, giving rise to inappropriate scientific names. One such example is the Red-faced Mousebird Urocolius indicus, described by John Latham as coming from India (indicus). Mousebirds are endemic to Africa and the Red-faced Mousebird was actually collected by Levaillant along the Gamtoos River in the Eastern Cape. 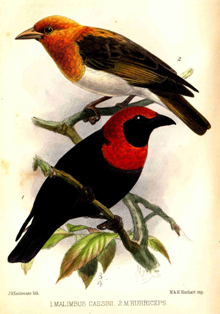 The third name proposed for the Red-headed Weaver is Ploceus rubriceps, and fortunately Swainson did not name any weaver Ploceus rubriceps! Thus Anaplectes rubriceps becomes the correct name for the Red-headed Weaver. It was collected by Johan Wahlberg (1810-1856), a Swedish big game hunter and bird collector, after whom Wahlberg's Eagle Aquila wahlbergi, for instance, is named. Wahlberg shot the eagle when he was in Mohapoani, near Rustenberg, North-west Province, in November 1843. He also collected several other birds from this locality, and sent them to Prof CJ Sundevall (1801-1875). These were described by Sundevall in various publications. One of the species collected here by Wahlberg was the Red-headed Weaver (at least five specimens), described by Sundevall 1850 in a Swedish journal "Ofversigt af Kongl. Vetenskaps-Akademiens Forhandlingar" as Ploceus rubriceps. Three specimens are housed in Sweden (NRM 568683, NRM 568684, NRM 568685) and two in Berlin. Sundevall named the species after the red head of the male (rubric = red, ceps = head). Wahlberg financed his exploration by hunting ivory. 13 years after collecting the Red-headed Weavers, on 6 March 1856 he was tragically killed by an elephant in northern Botswana.

This is not the end of the story, however. A confounding factor has been the number of forms of this species and the genus to which it belongs. Early authors separated the Red-headed Weaver into three or more species based on plumage differences. The American ornithologist, Chapin (1954), for the first time considered all the different forms of the Red-headed Weaver as conspecific and listed them as races of Anaplectes rubriceps, apparently realising that this was the correct name. Most subsequent authors followed Chapin in having one Red-headed Weaver species with several subspecies.

The genus Anaplectes was first used by Reichenbach (1863) and Elgood (1982) showed that this is the correct genus. Putting the Red-headed Weaver into Anaplectes added to the confusion about the name for this species and Howard and Moore (1991) seem to have believed incorrectly that once the species was moved to Anaplectes, the name melanotis Lafresnaye was no longer preoccupied. The latest edition of the Howard and Moore is a web-based corrigenda where the correct name is now used. Ironically, the latest DNA work (still unpublished) suggests that the Red-headed Weaver is most closely related to some Ploceus species. If this species does revert to the genus Ploceus then the ICZN rules prevent confusion - the new name would be Ploceus rubriceps and still not Ploceus melanotis.

Recently southern African bird books have started using the name Anaplectes melanotis by incorrectly invoking the Principle of Priority. These include the latest Roberts 7 edition where the editors changed my text to use the incorrect name. However, all international taxonomists recognize that the correct name is 'red-headed' and not 'black-eared', ie. Anaplectes rubriceps, as shown conclusively in a recent paper published in Ostrich (Oschadleus 2009). This article draws attention to the correct name that should be used by all authors of southern African (and African or global) bird books in future.