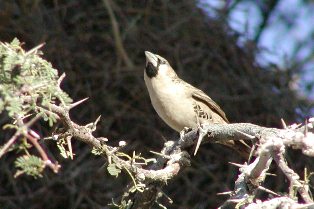 This is a new project for teams of ringers to make an important contribution to studying the population dynamics of the Sociable Weaver Philetairus socius, a cooperative breeder restricted to arid and semi-arid regions of southern Africa. This species could show large range changes in future decades due to climate change. Ringers can help track these changes by ringing at selected colonies on an annual basis to obtain survival and breeding productivity data, combined with counting nest chambers to provide nest size data.

Our aim is to understand the population ecology of Sociable Weavers, i.e. what makes colonies grow and what makes them decline. And we would like to get this understanding for a number of colonies in different parts of the species range. This will help us anticipate likely effects of climate change on these birds and to use them as indicators for change in arid regions of southern Africa. 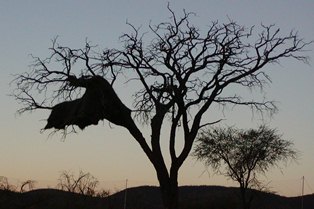 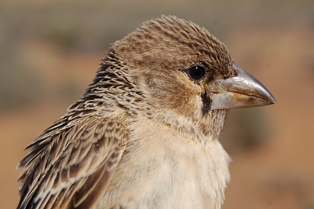 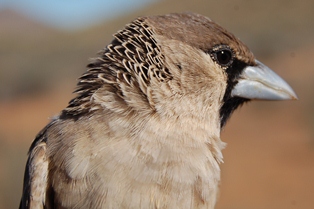 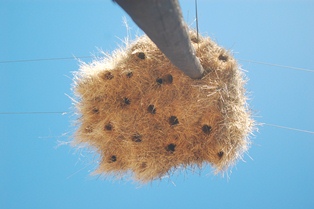 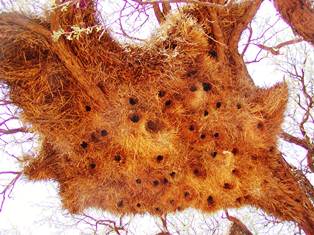 Registered sites will be shown here (by Aug 2012).
Summaries will be posted here (from Sept 2012), showing data collection progress.
Most recent PHOWN record for the Sociable Weaver To see all PHOWN records for the Sociable Weaver, see here

The headers below refer to Weaver News items featuring PHOWN. Click on a header to see the News item, which includes the full news item. (The number in brackets is the date that the news item appeared on Weaver Watch).